The earlier lag in new posts was caused as much by struggles to locate a reliable internet connection as it was from being insanely busy.  My husband joined me for the first leg on my journey and he wanted to get around and see the sights of London (it’s only his second time to the city).  More creative and detailed writings inspired by these activities are to follow, but here’s a rundown of my first week in London, (the first of two parts).  For a full-size view of pictures, just give them a click!

The day started at Westminster Abbey and for the first time I actually went inside!  On all previous visits I passed it up because it is so expensive.  The church itself is beautiful, but the tombs within the walls had my interest from the beginning.  The history and writer geek in me marveled at the graves of Elizabeth I, Chaucer, and Isaac Newton. 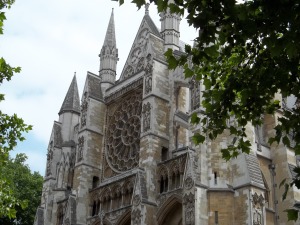 After leaving the Abbey, we decided to stroll along the South Embankment of the Thames and soak up a little visit from the sun.  The river flowed along and so did the throngs of tourists, but it’s almost tradition to walk down this side of the river and take in the sights of the London Eye, the film museum, street performers, the London Aquarium, and cityscape across the Thames.

We then wandered into St. James Park and sat for a while to take in the scenery. Waterfowl, tourists, locals, and a stunning view of Buckingham Palace filled out the rest of the afternoon. 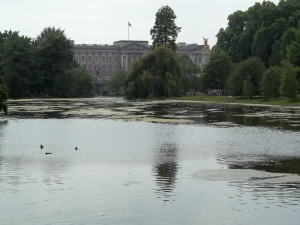 For dinner, we visited The Swan on Bayswater Road.  We loved this place when we came a few years back and its great to see the place is still thriving.

We started the day at the Natural History Museum where we spent most of the morning looking at some pretty amazing exhibits and taking in the massive and beautiful architecture of the building.  Highlights included a life-size model of a blue whale, which really stunned me into a sense of feeling very, very small.  It’s one thing to hear how big these creatures are and quite another to see it.  The mineral exhibit, gem display, and Charles Darwin’s collection all included far more than I could ever see in one day.  And to cap it off, a slab of a giant redwood pushed me back into a dimension of feeling somewhat miniature in the grand scheme of things.  It’s a big world out there, isn’t it? (Another story from this place is in a previous post, “A Brilliant Stroke of Luck.”  FYI, my camera is still with me and we are taking great pictures!)

Just up the street from the Natural History Museum is the Victoria & Albert Museum which houses centuries of art and artifacts from all over Europe.  This is one of those museums that needs more than one visit as there is simply too much to see.  My favorite displays included textiles such as clothing, linens, and rugs.  I’m always amazed at how clothing was a valued commodity before industrialization because each garment took so much time and skill to make.

For the remainder of the day, we took it easy at the Victorian Fountains in Hyde Park.  The guy sitting on the bench next to me inadvertently inspired and ended up as the central character in a new short story I started writing as the fountains sprayed and ducks played.

We took a break from the city and took advantage of an offer to visit a local street market just outside of London.  The lady from whom I’m renting a room packed us into her little car and away we went to St. Alban (this was one crazy ride and I will tell the full story in a later post).  The market had everything from used books, fresh bakery, seafood, and delightful piles of junk.  I bought a homemade chocolate frosted doughnut that was about as big as my head (it took two separate sittings to eat the whole thing).  Along the route of the market I stopped at a local music store and found a CD for an artist I absolutely love, but his CD was never really made available in the States – Alan Pownall.  If you can find him, give his music a listen.

In addition to the market, St. Alban has a beautiful cathedral that dates back a number of centuries.  The grounds include a very old cemetery and beautiful gardens. As we trekked back onto the high street we encountered a medieval bell tower that dates to the 14h century. 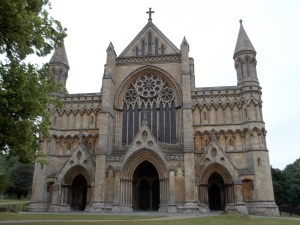 Back in Muswell Hill, we decided to stay in town and just relax.  I reconnected to the internet and reunited with my favorite cup of coffee – a café mocha topped with whip cream.  While I navigated through a hundred e-mails, my husband fine-tuned a few sketches he’d been working on since our arrival.

We filled the afternoon with a trip to the local cinema where we saw “X-Men First Class.”  The experience warrants another far more detailed post as going to the movies was just as entertaining as the movie itself.  Let me just say that Americans are spoiled rotten at the movies.

We stayed in for the evening and put British TV on the list of tourist attractions by watching the likes of Top Gear and Qi.  Both shows are among our favorites and it was fantastic to watch them on television rather than youtube.

6 thoughts on “A Busy Week in London, Part I”