With my husband safely dropped off at the train station, I found myself alone and wondering how to fill my day.  I decided to cross Hyde Park and make an attmept to find a coffee shop and bookstore I remember visiting six years ago. So, I made my way to the High Street Kensington station on a vague hunch that a little ways down the road I’d find what I was looking for.  It’s been a long time since I last tread this stretch of sidewalk and much has changed.  Large new stores and redecorated facades have given this place a first class makeover (never mind that it was beautiful prior to the work!).   I was just about to give up when I spotted the familiar signs for both coffee and books, side-by-side just as I recalled.  Over the next three hours I enjoyed a hot cup of coffee and perused the latest paperbacks.  Here’s to retracing old footsteps!

I spent the morning on a walk through Mayfair guided by a book I bought a few months ago.  It took me through the main trendy streets and lead me into hidden causeways away from crowds and traffic.  At one point, I found myself in a park reportedly used by KGB spies during the Cold War as a communication locale.  The park was actually so beautiful, I decided to sit and read for a little while along with a few other locals. 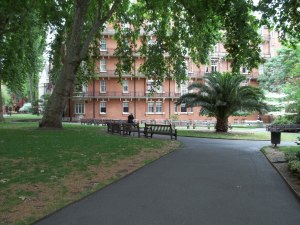 Above: Mount Street Park. Nope, I won’t tell which bench was (supposedly) used to convey secret messages of espionage.

The end of the walk left me at the tip of Green Park, so I opted to go for a stroll through the oak lined paths of this smaller cousin of Hyde Park.  I picked a bench that allowed me a glimpse of Buckingham Palace, but kept me far enough away to avoid all the hoopla that usually surrounds the Queen’s home.  On my right, a group of locals worked hard on their soccer game while a school field trip commenced on my left.  To my delight, no one gave me the “Oh God, you’re a tourist” look.  As long as I don’t speak, I suppose I blend right in.

Not every day can be perfect, there always has to be a rough one in the mix.  I woke up to frigid temperatures and it didn’t warm up for the whole day!  The plan was to go to the Tate Modern Museum and everything seemed to head in that direction while I was on the Tube.  No problems, no delays.  Things went downhill when I emerged street-level and found myself in a cold, torrential rain.  I decided to tough it out and walk very quickly towards the Tate, but of course they closed off the sidewalk due to construction.  I tried to find another way, but ended up getting utterly lost.  And it was still pouring rain.  I gave up after about 40 minutes and after I was soaked to the bone.

I went back to my room and worked on getting dry and warm.  The day got better once I headed down to what I now call my Starbucks to get a cup of coffee and catch up online.  A hot mocha fixes everything and so does a couple hours of writing.

I caught a little chill from the previous day, so I decided to stay out of the main city and just relax for the day.  The last thing I wanted was a cold!  Saturday in Muswell Hill turned out to be a very nice way to use up some time.  I spent the morning and early afternoon camped out at Starbucks, where I wrote and wrote as though there were a million words swirling around in my head.  After my computer battery died, I walked through the high street and visited all the local shops.  I didn’t buy anything, but it was fun to see what was for sale. 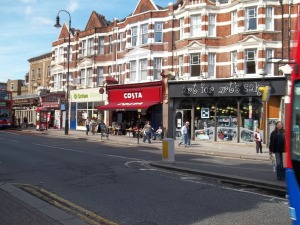 Above: Muswell Hill Broadway.  Art for Arts Sake is easily one of the most fun stores I’ve ever been to – lots of fun and creative craft projects.

By early evening, I sat in front of my bedroom window took my time reading the newspaper and snacking on chocolate butter biscuits, which were absolutely divine (I will be devoting an entire post to delicious junk food I’ve been noshing on since I got to London!).  Good thing I walk an average of 5 miles a day or all the snack experimentation would spell bad news for fitting into my clothes.