When I first got the notion to write a novel, the most daunting part was getting started.  I had the inspiration, a basic story idea, and a main character, but I realized very quickly none of my ideas mattered unless there was a system in place to give them room to grow.  A journal wasn’t big enough for the job and a laptop didn’t offer the tactile experience I needed to connect to my ideas.  What I ended up creating was The Big Notebook.

I went out and bought the largest spiral notebook I could find along with a set of highlighters, my favorite blue pens, a pair of scissors, and a glue stick.  Then I collected catalogs, magazines, and newspapers from around the house.  With these tools, I could start the mad process of brainstorming or what I like to call “extreme outlining.”  The only rule was anything goes if it has even a remote chance of fitting in with the basic inspiration for the story.

Now, I am an extremely organized person who is well known for color-coding and alphabetizing everything.  Initially, I was going to divide the notebook into specific sections for different categories of information, but that plan fell apart almost instantly. Ideas don’t present themselves in any particular order in my head, so it made more sense to let the notebook come together with a more holistic approach.  In effect, I made a giant mess that defied all organizational logic, but at least the ideas were no longer just floating in my head.

Elements of the mess were then classified into a set of categories I’ve listed below. Underneath each category is a brief summary of what I collected and/or scribbled on random pages.  To keep it all straight, I used a system of highlighter color-coding and symbols. 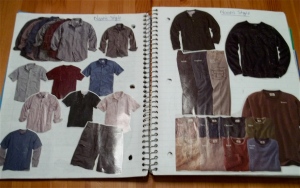 Above: Part of the main character’s wardrobe spread.

Above: Research I printed out from the internet (good ol’ wikipedia!) regarding film processing.

The result of collecting all this information was a giant notebook with page after page filled with stuff that makes no sense to anyone but me.  While I was writing the rough draft of my novel, the notebook was always by my side as a reference source, just like my favorite dictionary.  When I wasn’t writing, the notebook was still always within reach to record ideas on the fly.

While an excellent storage unit of all my ideas, I added a few other elements to make the notebook my true writing companion.  Writing is a difficult undertaking no matter the scope or size of the project.  There are days of utter defeat where a little motivation can go a long way.  On the inside cover, I wrote line after line of encouraging quotations so I would never, ever quit.  My notebook also has a couple dividers with pockets, so I stuffed them with articles about my favorite authors and letters from friends who have supported me from the very beginning.  Last, but certainly not least, I used a couple pages to brainstorm a playlist of songs for my main character and his story.  I’ve mentioned this rather critical aspect of my writing process in a previous post How Music Helped Me Write A Novel.  Music not only helps to set a mood, but it does wonders for the creative mind. 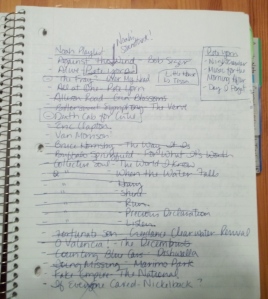 Above: The initial brainstorm list for Noah’s Playlist.  I have a to chuckle at a few of the entries as they are so wrong for the character, but that’s part of the process.  The final playlist took more than a month to perfect.

Above: The inside cover of my notebook.

Everyone has a unique way of approaching the task of writing a novel.  Some keep a computer file while others have no plan at all, but ultimately a novel comes together when a writer finds his or her groove.  Whether it be a Big Notebook or something else, every aspiring writer owes it to themselves to find a method that sets the imagination free.

47 thoughts on “The Notebook That Built My Novel”