When I went to London for the first time back in 2002, I had a Rough Guide map tucked into my backpack.  It turned out to be such a great map, it’s gone on every trip to London, including my 2011 sojourn.  Obviously, using a nine year old map isn’t always a good idea, but it’s never lead me astray, (when I get lost, it’s either operator error or I left my compass in my other jeans). Between a durable plastic coating and including most of the little streets, this is my all-time favorite map.

Aside from laying out the whole city, my Rough Guide map includes a list of 20 can’t miss sites of London.  To-do lists are irresistible, so every time I go to London I make it a point to check off at least one item from the London bucket list. 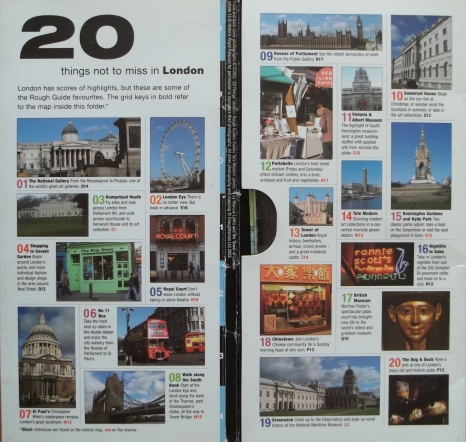 This museum holds treasures from the likes of Da Vinci, Van Gogh, and countless other legendary artists.  No matter how many times I walk through the doors, I am always in awe of the masterpieces hanging on the walls.  The first time I saw a real Van Gogh, I forgot how to breathe. The best part is, the whole experience is free, (though donations are greatly appreciated).

The tallest ferris wheel in the world is definitely worth the price of the ticket and long line.   The views of London are truly spectacular and it moves slowly enough to allow enough time to fully take in the vistas along the Thames. Some of my most beautiful memories of London come from my ride on the London Eye as I was lucky enough to reach the apex at sunset.

This is the first of yet-to-complete items on the list.  There are so many parks in London and I’m gradually making my way to each one.  If anything, Hampstead Heath  gives me a reason to return to London (as if I need one!).

There is so much to see and do in Covent Garden.  The shopping is a little out of my league, but it’s fun to look in the windows.  However, my favorite part of Covent Garden are the street performers that populate the center court and side streets.  In the course of an afternoon, there’s everything from music, magic shows, mimes, human statues, and artists.  All I need is a cup of coffee and few quid to toss and I’m all set for a good bit of fun.

This is the second yet-to-complete item on the list.  I walk by the theater district on every visit, but I have yet to step foot in a theater.  I travel on pinched penny, so the choice to pass on taking in a play is usually made for financial reasons.  One of these days, I will go and savor the thrill of London’s famed theater tradition.

How about bus #43?  On my last trip, I took a double-decker bus from London Bridge all the way to Muswell Hill Broadway.  It took about an hour, but I saw everything from famed sites to little neighborhoods where tourists seldom go.  My tired feet got a rest, the rain couldn’t get me, and I saw the city from a completely different perspective.  Not bad for the price of a bus fare!

After a while, all churches in Europe start to look the same, but St. Paul’s really does stand out as a uniquely beautiful piece of architecture.  It’s not free or cheap to go inside, but its worth the price to stand beneath distinctive dome.  My jaw literally dropped and stayed that way for much longer than what would be considered polite.  After the dome, take some time to admire the marble floors and columns and then climb up the second floor to see the knave from on high.  The crypt down below is also worth a look, for nothing else but the chance to say, “I crept through a crypt.”

8. Walk Along the South Bank

This is one of my favorite things to do in London.  Not only is the view amazing, but the South Bank is full of vendors, museums, shopping, parks, and kiosks.  While a bustling place filled with people, it is also a place to relax and soak in the atmosphere.  On my last trip, I strolled down the embankment at least half a dozen times. If you go, be sure to listen for the sound of the Thames lapping the shore.

From the outside, Parliament is a pretty impressive building.  The gothic spires and arches serve as a symbol of London and house the government machine that runs England.  The real action, however, happens on the inside with spirited debates and the pageantry of tradition.  On selected days, Parliament is open to the public and it’s totally free!  I sat in what felt like box seats and watched representatives debate rather hotly about energy regulations in the U.K.  It sounds like a boring subject, but the Brits keep it lively with witty banter.

On three previous trips, I saw Sommerset House from a distance, but never got the chance to venture close enough to see what all the fuss was about.  This summer, I finally walked into the courtyard and was instantly awestruck.  The central court is enormous and surrounded on three sides by the beautiful white facade of the house.  In the middle is a large set of ground fountains that come alive at different intervals.

This museum houses art from various time periods and aesthetics, making it a remarkable way to spend the day.  My favorite part of the museum are the rooms that hold textiles and artifacts from the 15th to 18th centuries.  I’m fascinated by social history and every day life of people who lived so long ago.  The V&A beautifully preserves traditions that would otherwise be lost.

Every weekend, Portobello Road turns into a gigantic flea market selling antiques, food, art, crafts, books, music, and everything else imaginable.  Sadly, its turning into more of tourist trap these days, but its still worth a visit to see the vibrant colors of Notting Hill and to feel the energy of rabid shoppers.   Buskers jump from one street corner to the next and the smell of Nutella crepes fills the air . . . what a way to spend a Saturday morning!

For history buffs, the Tower of London is fun jaunt into the past as it’s a relic dating back to the 11th century.  I’ve walked through the courtyards and surrounding area, but I’ve never gone inside to the crown jewels.  It costs a pretty pence to see the royal sparklers and I usually opt for the ability to buy dinner instead of seeing diamonds.  What can I say, jewelry just doesn’t do it for me!

Back in 2000, an out-of-use power station was converted into a museum of modern art.  The building still retains an industrial feel, but it holds some of the most amazing modern art fixtures of the 20th century.  I spent an entire afternoon looking at artwork that was both mystifying and inspiring.  Like most museums in London, its totally free and worth a visit.

One of my favorite things about London are the parks that give a beautiful bit of green and quiet in the midst of a busy city.  Hype Park is the perfect place to sit and read for an entire afternoon, grab an ice cream, or enjoy Speaker’s Corner on Sunday mornings.   There’s always a shady tree and a spot of solitude, making this an always lovely retreat.

I’m not really into dancing and drinking into all hours of the night, so I’ve never had a strong desire to head out to Old Compton or Carnaby Street.  However, I did get lost once on Carnaby Street at night, so I have seen the flicker of neon lights.  Does that count?

Whenever I’m in London I set aside an entire day to visit the British Museum.  It’s incredible collection spans thousands of years and the knowledge contained in this place is beyond compare. What shocks me still is that I have yet to see every display!  No matter where I wander, I always learn something new.

The first time I strolled through Chinatown was the year I went to London and China in the same summer.  It’s beyond fascinating to see Chinese and British cultures fuse together.  Ducks hang in the windows of Victorian era buildings and Mandarin Chinese cadences mix with British English accents.  The whole experience gives me hope of peace as these two wildly different cultures have found a way to co-exist.

Where else can you put one foot in the Eastern Hemisphere and the other foot in the Western Hemisphere? Greenwich is a cozy little community with an amazing museum filled with naval and time-keeping artifacts.  The best way to get there is to take the ferry down the Thames.

Hmmm . . . I prefer The Swan.  Either way, no trip to London is complete without finding a local pub to spend your evenings.   A little grub with good English ale is a great way to end the day.  During the 2006 World Cup, I frequented the The Swan to mingle with fans as England attempted to break out of the early rounds.  I loved the place so much, I dropped in again this summer and enjoyed a few pints.

The bucket list is nearly completed, but I won’t be crossing London as a whole off my list any time soon.  It feels too much like home.