Halloween has never been a favorite of mine, but I am fascinated by the history of this quirky holiday.  While I may not dress up in costume or scare myself with horror movies, I can’t help but celebrate with some fun facts about the origins of Halloween.

The origins of Halloween can be traced back more than 2,000 years to the Celtic festival of Samhain. They celebrated the new year on November 1st, a day associated with the end of summer and the beginning of the cold, dark winter.  This time of year was associated with human death because the Celts believed that on the night before the new year the boundary between the dead and the living became a little blurry. In other words, the ghosts of the dead came to visit on October 31st. 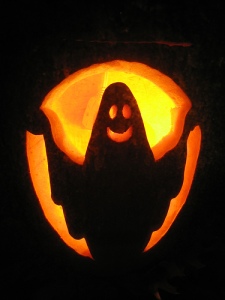 The idea of costumes originated with the Druids who dressed up in animal skins and told each other fortunes while a bonfire raged.  Later, costumes and masks were worn to scare off ghosts or avoid being recognized by dead sprits. To keep these spirits from entering the home, food and wine would be left on the front doorstep. In addition, carved turnips or gourds were illuminated as a means to ward off evil spirits, which eventually evolved into the tradition of carving pumpkins.

By 43 A.D. the Romans conquered most of the Celts and therefore Samhain was combined with Roman festivals. Feralia was a day in late October when the Romans commemorated the passing of the dead, while another day honored the goddess Pomona.  The symbol of Pomona was an apple, which might explain how the tradition of bobbing for apples began.

In 1000 A.D. All Soul’s Day on November 2 became a day to honor the dead.  With this holiday, the trio of All-hallows Eve, All Saints’ and All Souls became known as the Hallowmas and they were celebrated with bonfires, parades, and dressing up in costumes.

Trick-or-treating most likely started in England during All Souls’ Day parades where poor citizens would beg for food and families would give them pastries called “soul cakes.”  These were given in exchange for a promise to pray for the family’s dead relatives.  The practice was known as “going-a-souling” and was eventually taken up by children who would visit homes in their neighborhood and be given ale, food, and money.  The church encouraged this as a means to replace the pagan practice of leaving food outside the door.

Over the course of the 20th century, these origins slowly transformed into modern celebrations of parties, festivals, costumes, haunted houses, and candy.  While the original meaning has been lost, the traditions remain alive and well.  Even though I’m not a fan of anything spooky, I do love the candy.