The first thing to know about London is that it will rain. Every day. Despite knowing this, I still made a few rookie mistakes during my extended stay. I learned right away that hanging out in London for a week with the convenience of a centrally located hotel is quite different from a three week stay in the suburbs. The first major clue to this epiphany was coming home with wet shoes, socks, and pants after every outing into the city. Without a dryer or sunny, warm weather it took three days for a pair of shoes and socks to dry out and two days for jeans. I was starting to run out of dry clothes!

When I was down to my last pair of dry socks and shoes, I decided to be a little more observant. Tired of cold legs from damp jeans, I asked myself, “What do Londoners do when it rains?” Wherever I went I noticed they had dry pants and shoes, so I knew there had to be a trick. After a few days, I had some answers and learned how to stay dry!

It doesn’t have to be big, but it does have to be sturdy. The wind along the Thames can kill a weak umbrella in under two minutes. Londoners always seem to have one stashed in their pockets, purses, or tote bags. Even if the newspaper said it would be sunny, I learned to carry an umbrella anyway. It was worth every bit of the room it took up in my purse.

Both Londoners and Europeans in general wear shorter pants than Americans. I never understood why until I realized the bottom hem of my jeans soaked up rainwater faster than a chamois. Even after the shortest walk on The Strand my jeans were wet up to my knees! There wasn’t much I could do other than fold the hem under a couple of inches, but it did the trick. A discreetly placed safety pin attached the hem to my sock. I never came home with wet jeans, again!

Even when out in the city, there is always a place to duck in and escape the rain. Stores, tube stations, and coffee shops are all excellent places to wait out the kind of rain that demolishes even the best umbrella. At the entrances/ exits of Tube stations there’s usually a group of people reading the newspaper while it pours outside. Museums are also an excellent way to  dodge the rain as most of them are free and very warm inside.

My favorite way, however, to wait out the rain is to hang out in a coffee shop. One rainy day, I was walking along the Embankment when it suddenly started to pour. I decided that moment was the perfect time to sit down for a warm cup of coffee and a brownie. I joined many other Londoners in what I assume is a tradition. Sit by a window with your cup of tea or coffee and simply watch it rain. Be thankful for a moment where everything just stops, except for the rain. 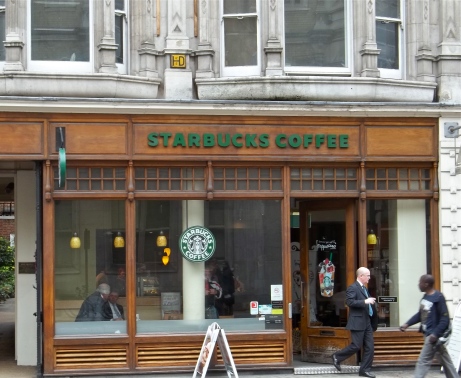 This sounds stupid, but it works. Throughout London, there are huge and heavily foliated trees. In particular, trees along the Embankment near the Globe Theater are proven rain blockers. One day it started raining and I watched as seasoned Londoners began to gather beneath the trees. I followed them and realized it was perfectly dry under those trees! Barely a drop had touched the sidewalk even though it was pouring. The key to this strategy is to stand at the base of the trunk. It rained for almost an hour, but hardly any moisture hit the ground where I was standing. To pass the time, I did what other Londoners did, I read a book. 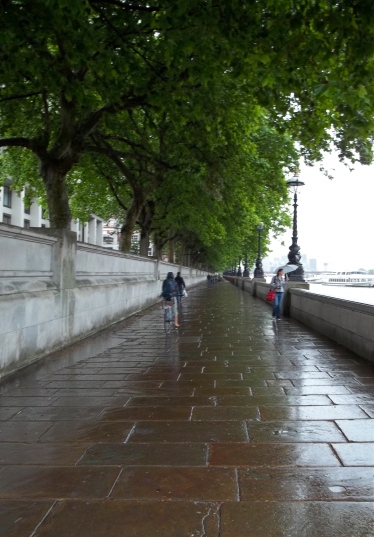 Rain hits on the South Embankment. These are not the magic rain blocker trees, but they are still beautiful!
Photo by: c.b.w. 2011

5. Stand under a bridge.

Again, this sounds silly, but it works. There are tunnels, benches, and spaces beneath almost every bridge in London. In many cases, there are buskers in these areas, so while you’re waiting out the rain you can enjoy some great entertainment. However, I wouldn’t recommend standing in these areas alone, but rather with a group. Especially, if you are one of those super obvious tourists. 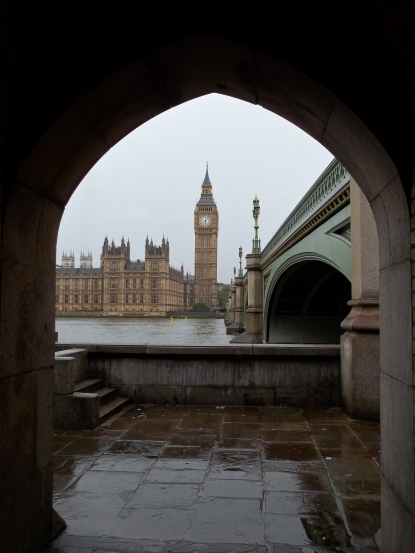 Hiding out from the rain under Westminster Bridge
Photo by: c.b.w. 2011

Those big rubber boots aren’t just for gardeners. They are sold all over London and I watched as people carried them in tote bags or by the back loop. If I didn’t have such a small suitcase, I would have invested in a pair. Made out of plastic or rubber, these boots protect your feet and legs from puddles, splashes, and wet grass. I swear London is the only place on earth where people don’t look ridiculous wearing wellies while on a walk through the park or rushing through the financial district. 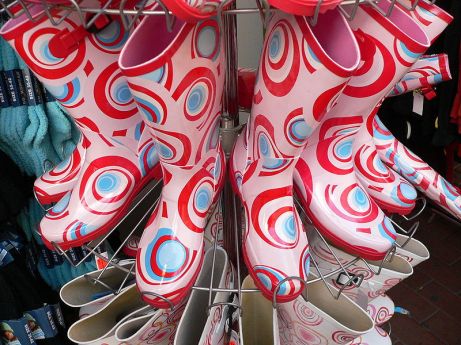 The last lesson learned? When the weatherman or newspaper forecast says it’ll be sunny, don’t believe it. The idea of sunshine all day long is more wishful thinking than it is reality. The rain is always there, ready to sneak up from behind and catch you by surprise!

Other Articles in the New Familiars Series:

Lunch In A Chinese Home

The Language of Signs: London

The Language of Signs: Prague

25 thoughts on “What Londoners Do When It Rains”