Oh, the things I find on Hulu. After catching up on Arrow, The Goldbergs, and Grimm, I found myself in the predicament of having nothing to watch while I grade papers. I’d heard good things about Sleepy Hollow, so I decided to give it  a shot. Within five minutes, I was completely hooked.

While the premise is intriguing (the show is a loose interpretation of Washington Irving’s classic The Legend of Sleepy Hollow), the character of Ichabod Crane and the brilliant actor who plays him (Tom Mison) are what truly captured my TV heart.

I’m only six episodes into the first season, so I know I may be claiming him as a TV boyfriend a bit early in the game, but I can’t help myself. And here are 10 reasons why:

1. He is literally a piece of living history. In the first episode, he “died” during the Revolutionary War and then woke up in 2014. The man rattles off Colonial and Revolutionary War history like an encyclopedia, but with the sensibility of someone who lived through it. The history teacher in me is swooning, (as the rest of me is fact-checking).

2. While he is a man stuck far away from his own time, he is surprisingly objective in dealing with his surroundings. Rather than panic, he explores the modern era with the mind of an academic or scientist. It’s fascinating to watch him mesh his knowledge of life in the past with his existence in the present.

3. He has a proper British accent. Need I say more?

4. Perhaps, he’s not everyone’s cup of tea, but he’s pretty easy on the eyes.

5. He says stuff like this … (in reference to what eventually becomes a Headless Horseman) 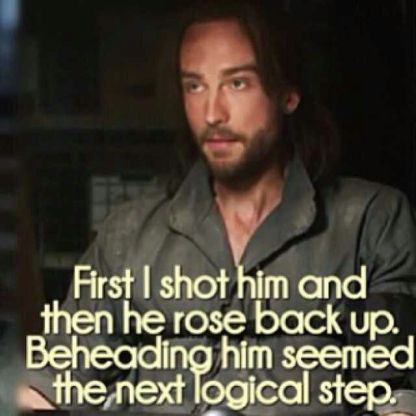 7.  Despite everything, he doesn’t forget who he is. Modern life doesn’t rob him of his manners, personality, or morals. Even when those things don’t jive with modern civilization, he refuses to let them go. I’m still wondering if he’s going to change out of those 18th century clothes!

8. At the same time, he’s not afraid to try new things. Like doughnut holes.

9. According to him, he instigated the Boston Tea Party (as a means for a diversion for a secret mission).

10. He can speak German and Middle English. Beautifully.

I’m sure I’ll have more to add to this list after the next six episodes. 🙂