WriteOnCon may have only lasted two days, but it’s taken me almost a week to process everything that took place during this incredible online writer’s conference. Between live events, critique forums, essays by industry insiders, Q & A sessions, and discussions I feel like I got a crash course in the world of publishing!

A week before the conference officially began, I posted my query letter on the Young Adult Query Critique forum. As many of my readers know, I’ve been working diligently on my query letter for months, so it was a big step to release it into the wild. Overall, the response was pretty good. Readers commented on the layout, but I expected that because I opted for a less traditional query format. Much to my relief, the synopsis and story idea both received positive responses. Overall, the advice I received  was very helpful and I think I made some good changes. Many thanks to those who took the time to read through my letter and offer suggestions.

Aside from multiple learning moments, I walked away from WriteOnCon with a little victory. On the first day, I participated in a live Twitter pitch event. Two editors from Spencer Hill Press were on hand to consider pitches of 140 characters or less. Not only did writers have the chance to pitch directly to editors, but there was the benefit of seeing their initial reaction to the pitch via video chat. On the surface, I found this terrifying, but the opportunity was just too good to pass up.

Thanks to Jennifer Eaton’s query letter critique, I worked on creating a stronger hook. Minutes before they opened the live chat, I made one last change to that hook and used it as my Twitter pitch.

As the event began, I watched the live feed with a knotted up stomach. What if they hated it? What if I set myself up for the ultimate humiliation? I had to keep telling myself that being a writer means having thick skin. Even if the response is horribly negative, I still believe in my story. Of course, there was also the chance that my pitch would be ignored altogether. Then, at the 4:57 mark, I got the shock of my life when they read my Twitter pitch.

I couldn’t watch the screen. I stared at my keyboard and held my breath as I waited for the response. I almost screamed when the first editor reacted immediately with “Oh, I like that.” She went on to request a query letter, which almost made me scream again, (I was in a public place when all of this went down, so screaming was not an option).  The other editor was not impressed, but something I’ve learned over the years is how subjective the publishing industry can be.  Instead of taking it personally, I respect her opinion. Regardless, I managed to pitch my book to an editor who loves muses. Seriously, what are the odds??

My happy dance moment can be seen on youtube, (it starts at 4:57). However, the entire event is worth watching as these editors hold nothing back and offer fantastic insight and advice on the art of pitching.

I have since sent a query letter, so now it’s all about waiting for a response. Even if nothing comes of it, I’m still immensely proud of myself for taking such a huge step forward. This entire experience has reminded me that good things can happen if I’m brave enough to take a chance.

Thank you to the organizers of WriteOnCon for offering such an amazing event!

One never knows what’s around the bend, but if it were up to me, I’d travel down that barely there dirt path. It wonders beyond the easy curve and dares the traveler to see beyond the stones that block free will. Roots lay traps, while trees mark the way. Follow where courage leads and you will know freedom.

Memorial Day is a day where we all pause and remember those who have fought for their country. It’s the moment where regardless of where we stand in our opinions of war, gratitude and reverence are paid to those who gave up their lives when called to serve.

While Memorial Day is filled with American flags in my corner of the world, I can’t help but extend my gratitude beyond the borders of my country.  Throughout my travels I’ve come across memorials to people who fought for what they believed was right and were more than willing to lay down their lives for those beliefs.  When the world was at war or governments oppressed their citizens, these brave soldiers and civilians stood up to protect the sacred right of freedom. As my thoughts are with American soldiers who fought gallantly (like my grandfather), I am also remembering brave souls worldwide.  My sincere thanks goes to all who fought with so much courage.

The photographs below come from places that have touched me deeply as they are moving tributes to those who gave up everything in the hope that others could be free.

Women all over the world lent a helping hand to the war effort and they deserve a huge thank you for stepping up and standing strong.  In London, a large monument along Whitehall commemorates the service of women in World War II.

The Women of WWII Monument on Whitehall, London. Photo by: c.b.w.

As Czechoslovakia became a battleground between democracy and communism, young citizens gathered in droves to defend their freedom.  And they did so knowing full well they may never return home.

This plaque appears on the enclosure wall of Prague Castle. Photo by: c.b.w.

I’ll never forget my walk through Wenceslas Square in Prague.  As the main site of the Prague Spring protests, thousands of people filled this square and risked their lives in the process.  Oppressed by an invasion and subsequently brutal communist regime, basic freedoms were denied and human rights repeatedly violated.  These strong individuals stood together even as the tanks rolled in and armed soldiers took aim.

Memorials commemorating those who died in protest of the oppressive occupation of Czechoslovakia by the Soviet Union. Photo by: c.b.w.

Sometimes memorials are unintentional, as is the case of Tiananmen Square in Beijing, China.  No monuments exist for those who so bravely filled the square in protest of corruption of the Communist government and cried for their voices to be heard.  The protests of 1989 are remembered by those who watched them unfold, but forcibly forgotten by a government that opened fire on innocent people. The photograph below is the People’s Heroes Monument meant to commemorate those who fought in China’s civil war on the communist side, but after 1989 it has inadvertently come to represent something quite different.  The monument is roped off so people can’t get close enough to see the bullet holes still lodged in the stone.  For those who know where to look, the ropes can’t hide the damage.

May we never forget those who gave up everything in the name of freedom and the preservation of basic human rights.

Every Sunday for the last few months, I’ve posted a photograph and lines of poetry (or musings) inspired by my  journey to London.  Sundays in London has been a cathartic experience as it has slowly lead me to a deeper understanding of why I was so driven to spend an extended period of time in a place so far from home.  My journal is filled with meandering thoughts fraught with both epiphanies and questions, while my pictures captured every nook and cranny of my surroundings, but nothing fit together for a definitive answer.  The experience as a whole was life-altering, though I could not decipher how and why.  All I knew was something deep inside of me had indelibly changed, (See Finding True North).

The lines I wrote for A Bridge Crossed began in London, but only in small fragments.  At the time, I didn’t have enough understanding to give my disjointed words a voice.  The finished poem is representative of the answer I’ve been seeking for the better part of a year.  After much contemplation and creative wandering, I know why I went to London.

Almost immediately after my return, I kept thinking, “I learned I was a lot stronger than I thought.” The only thing I couldn’t figure out what was why this mattered so much.  I already knew I was a strong person, so I let the idea sit and expand until it chose to tell me more.

Ultimately, the answer hit me in one big swoop, damn near knocking me out of my seat.  I still don’t know what triggered the thought, but I’m not one to question inspiration.  What matters is that I have my answer.  London showed me how strong I have to be to reach my dreams.  Despite being in a place  I loved, I was alone, overwhelmed, disoriented, and completely out of my element.  And there was no one to run to except myself.  I eventually found my groove and embraced every sensation, but this was a hard path to find.

Writing feels much the same way as isolating yourself in a foreign place.  Along with all of the above, there is rejection (and a lot of it), frustration, fear, and doubt.  A list like this puts a serious dent in strength and determination, sometimes to the point of giving up.  Courage doesn’t come free and strength comes at a price.  I have to be willing to endure everything that tries to knock me down.  I must remain standing no matter how difficult or demoralizing it gets.  As London showed me, being stronger than the impediment has an immense payoff for through the heavy fog there is the realization of a dream.

There is a difference between understanding what it means to be strong and knowing from experience what it is to be strong.  I can do anything and I can take a few punches, too.  Some may call me crazy for learning this lesson halfway around the world, but I honestly can think of no better place.  London got under skin from the very first moment I saw it and has never let go.  I hope it never does. 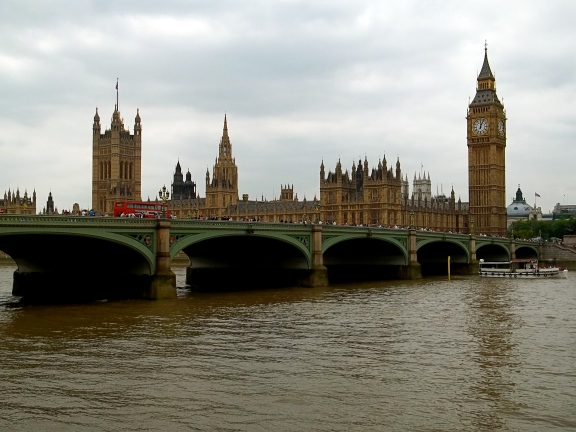