In my many years of travel, I’ve always made it a point to snap pictures of street signs or other signs that I find interesting or funny. It’s rather fascinating to observe how a culture communicates rules of the road or expected social behavior.  For example, in London, many of the signs are very polite.

Near Southwark Cathedral on the South Embankment, London
Photo by: c.b.w. 2006

At home I’m accustomed to the red Exit sign that shows me how to get out of any building. In the London Tube, however, there is what I consider a more gentle way of pointing out the exit. 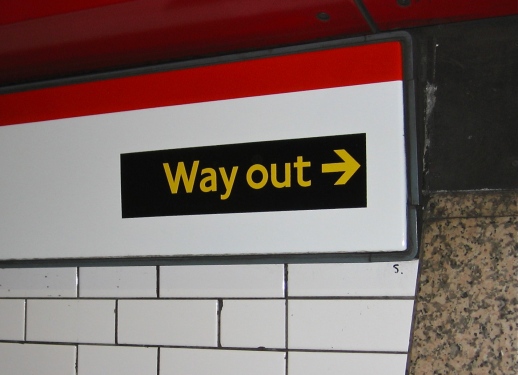 At Tate Modern, this sign is posted on the elevator. I found it very thought provoking in that it asked people to be mindful instead of simply putting a wheelchair symbol and hoping for the best.

If this sign doesn’t inspire you to make the extra effort to climb the stairs, I don’t know what will!
Photo by: c.b.w. 2011

However, the use of symbols is employed around heavy tourist areas to accommodate those who don’t speak English. Around Buckingham Palace I spotted these signs:

Now, I’m not sure what these signs are indicating, but I have a couple of guesses. Traffic comes from all different directions on the roundabout in front of the palace (and they drive like idiots), so maybe it’s telling people to watch for traffic. Or, perhaps it’s a sign telling people there’s a tourist site (the eye points to the palace) and there is also a place to pick up a taxi. Either way, they are helpful!

Tourists also get reminders on how to cross the street safely. Foreigners are often thrown off by the reversal of traffic direction on the roads. Americans in particular are in the habit of looking for traffic on the right side of the road instead of left. To keep tourists from getting squashed, crosswalks in the central part of London are painted with a handy bit of advice! 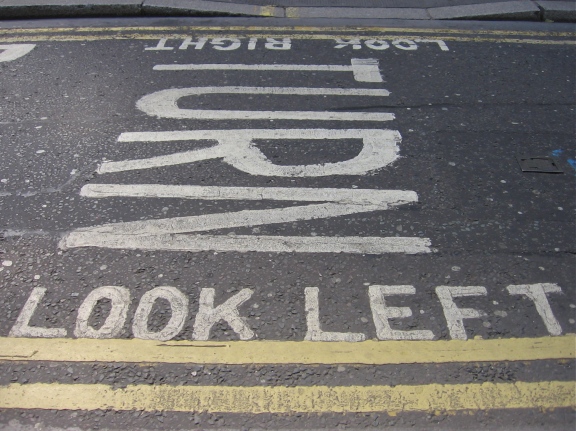 Crosswalks also receive a little extra attention in that they are marked with special road lines to warn drivers ahead of time to slow down. Hence, the infamous zig-zag pattern before the thick horizontal bands of most crosswalks.

Watch out for pedestrians! Zig-zags in Muswell Hill
Photo by: c.b.w. 2011

Traffic signs in London are very similar to those in the U.S. in that they convey the same concepts, but different words and shapes are used. 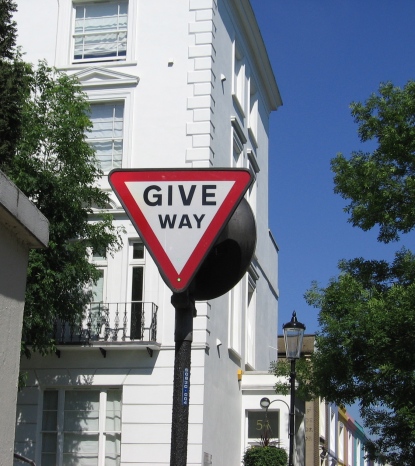 Speed limit signs are round with a red rim:

Bike lane signs are also round with a red rim:

In Europe in general, the names of streets are placed on the sides of buildings or walls. Very rarely have I spotted a street name on a separate pole or traffic light. I prefer this system mainly because it’s easier to see the sign and there’s less likelihood of a car accident wiping out the sign. Tourists, however, have a hard time making the adjustment. Sometimes I chuckle when I see someone with a map looking everywhere but halfway up a building. In neighborhoods, street names are usually placed on brick walls that flank a residential entrance or a retaining wall.

On most of the main roads, street name signs also include the name of the London borough where the street is located as well as part of the zip code. For example, Drury Lane is in Camden and Portobello Road runs through Kensington and Chelsea. 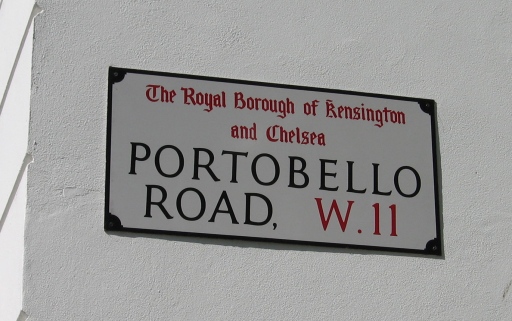 Of all the interesting signs in London my absolute favorite is a small laminated sign zip-tied to the fence at Speaker’s Corner in Hyde Park. For me it has always embodied the broader purpose of traveling and experiencing new places.

Keep an open mind, my friends!

There are too many signs for just one post! Next week, we’ll head to Ireland and Prague, Czech Republic to check out their “sign” language.

What are some interesting signs you’ve seen in your travels?

Londoners, correct me if I’m wrong, but aren’t the zig-zag road lines slowly being phased out? I though I read that somewhere.

Lunch In A Chinese Home