In A Nice Surprise, I stated that I have a knack for getting autographs and it got me thinking about all the signatures I’ve collected over the years.  A friend recently called me a “ninja” and I think she might be right, especially after receiving the latest addition to my collection.

My collection includes a variety of autographs, but not all come from household names. Like everything else I collect (books, rocks, etc), every signature means something to me on one level or another. Gathering autographs is all about connecting to people who have inspired me or have had a positive influence in my life.  They are all attached to memories, beautiful moments, and sometimes life-altering experiences.

It wasn’t easy to find all my autographs, but I did manage to locate the vast majority.  Many autographs are personalized to me, so in order to safeguard my identity I’ve blotted out my real name.  Sorry about the fuzzy areas, but it had to be done!   To save space, a number of photos have been made into thumbnails, but one click will enlarge them to full size.

This week, I hit what I consider to be the mother lode of autographs because I never thought I could get Stephanie Meyer to sign my books.  She is rather reclusive and her fame is a bit out of my league.  However, through a brilliant stroke of luck I found myself in contact with a link in a chain that lead directly to her.  I sent my Twilight series and The Host down the chain and hoped for the best.  In just a few days, my books came back to me signed! 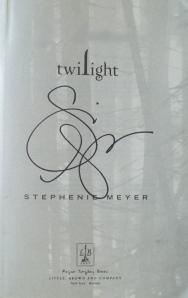 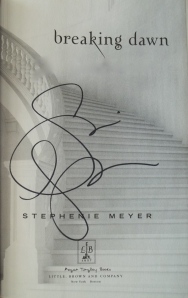 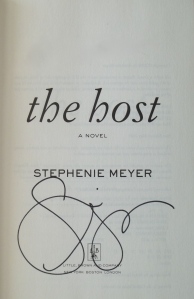 Along with the books, I sent a letter to thank her for the pivotal, even if inadvertent, role she played in the completion of my novel.  After failing three times to get a first draft off the ground, I was ready to give up.  I needed a kick in the butt and my mother gave it to me through an aptly timed phone call.  After reading an article on Meyer in the local newspaper, she told me, “If Stephanie Meyer can do it, so can you.”  In a strange twist of fate, that phone call came just as I was about to leave to catch the Twilight movie on opening night.   The next day I started writing my novel (again) and didn’t stop until I finished it.  While I have a village of people to thank for supporting me during the writing process, my mother and Stephanie Meyer both helped to wake up my muse.  Needless to say, these autographs mean the world to me.

Keeping with Twilight, I’ve also stumbled upon a couple more signatures related to the series. Peter Facinelli (left) came to me through a set of collector’s cards for the first Twilight movie.  The autograph was included in a collector edition binder I got through amazon.com (before the craze went haywire).  As for Justin Chon (right), I met him at a Twilight event a week before Eclipse opened in theaters. Both were dumb luck! 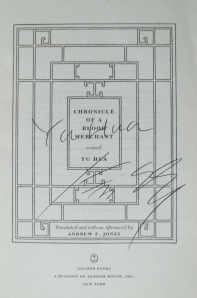 During a trip to China, I had the honor of meeting Yu Hua, an author who writes novels that deal with the Cultural Revolution and Chinese culture, (most notably To Live and Chronicles of a Blood Merchant).  His stories are intense journeys in to the human experience and explore complex emotions within families and friendships. In Beijing, I got the rare opportunity to hear him speak in a small group setting.  For two hours, he discussed his writing process, the challenges of writing in a country that censors everything with great scrutiny, and the power of words and creativity.  When I see his autograph, it reminds me how lucky I am to be a writer who has the freedom to write without penalty or restriction.  Despite the obstacles he often faces, he is a true example of how writing can set the soul free.

Back in 2007, I attended The Office Convention in Scranton, PA.  The stars seemed to align during the whole weekend as I found myself almost constantly in the company of cast members, writers, and producers.  While a fan’s ultimate dream, the convention and the people I encountered had life-altering effects that still impact me today.  Throughout Seasons 3 and 4, I wrote a series of posts on The Office message boards that analyzed each episode and a friend of mine brought them to the attention of one of the producers.  He liked what I wrote so much, he personally presented me with a cast-signed Season 3 DVD set.   Furthermore, he invited me for a one-on-one encounter with the writers of the show.  For close to an hour, I got to rub elbows with some of the most creative and amazing writers in the industry.  During this event, the same producer introduced me as a writer.  It was the first time anyone had ever given me that distinction and it changed my life.  Every time I sit down to write, I try to live up to the title of “Writer.”

The Office is a big reason why I started writing after a very long dry spell, so these autographs serve as a monument not only to fandom, but also as a constant reminder that I must keep writing.  One day I hope to send a published copy of my novel to the producer who gave me such a wonderful gift.

*I got a second personalized autograph from these cast members when I met them at the convention.

In addition, many of the writers, other producers, supporting actors, and even the creators of the show were kind enough to sign my autograph scrapbook.

When I got home from the convention, I had another little surprise waiting for me in the mailbox.  Jenna Fischer answered my letter and returned an item I asked her to autograph.