The first time I heard the name Mary Wollstonecraft was back in college during a women’s studies history class.  I admired her right from the start for not only having a strong voice, but the courage to use it at a time when women were largely expected to be silent.  Her writings have an air of elegance, but they are also among the first to advocate equality between genders, which made her one of the first feminists in history. She had guts, intelligence, and fortitude when the whole world told her women had no right to any of those things. Still, she believed.

Wollstonecraft died well before the women’s rights movement took off in the mid-19th and early 20th centuries, so she never got to see the ideals she supported take shape.  Seneca Falls, the suffrage movement in Europe and America, and a slew of other gender related battles took place long after her words. Long after there was any hope of them coming true.  She still believed, when all seemed impossible.

There are, of course, many individuals who contributed to the long journey of women’s rights, but I have a soft spot for Wollstonecraft.  She understood the importance of believing in something even when it seems so far out of reach.  While an incredibly difficult thing to do, it is well within our grasp if we make the choice to believe.

For the last two years, I’ve chosen “believe” to be my word of the year.  It appears throughout my home – on the refrigerator, end table, dream board, as well as several hidden places where I’ll unexpectedly happen upon it one day – to help keep me focused.  A couple of months ago I made a necklace with a “believe” charm to wear on days when doubt threatens to steal my determination. 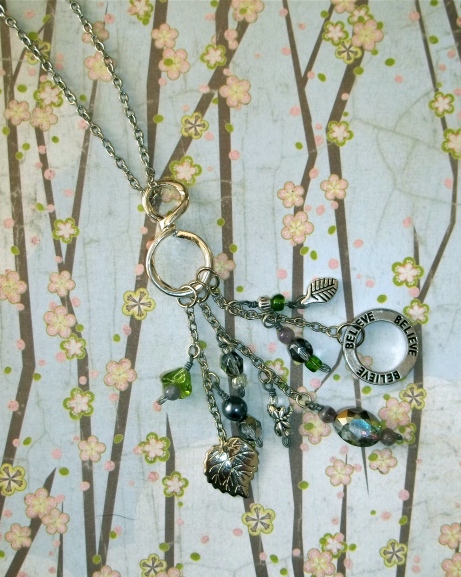 Each strand of the pendant has charms that I chose for both meaning and sparkle.  I’ve always loved leaves and their ability to bloom even after a cold winter, while dragonflies are the epitome of strength and grace.  On the third strand is the all important “believe” ring, an infinite tribute to the idea of believing without fail.  Just as Wollstonecraft kept writing, so will I.

My goals for this year are daunting and the propensity for rejection is immense.  How easy it would be to give up, but . . . I won’t.  I must believe.