Going to the movies has always been a guilty pleasure of mine.  I don’t know if its the giant screen, the smell of popcorn, or the make-you-go-deaf sound system, but I love going to the theater.  It doesn’t help that my local theater offers $5 deals for any show before noon, (even new releases!).  I’m not picky either . . . I’ll go to see anything from big budget blockbusters to indie films that had to beg to be distributed.

So naturally, I went to the movies or the cinema, (if I may practice Brit lingo),  during my stay in London this summer.  The experience itself ended up being more entertaining than the movie!  As mentioned in previous posts, I stayed in the small borough of Muswell Hill in North London. It has a very small town village feel, even though it’s part of much larger city, and is steeped in history.  This atmosphere is beautifully reflected in Muswell Hill’s Odeon Theater on Fortis Green Road.  It was built in 1936 during a major theater building boon, just as motion pictures were becoming more and more popular. 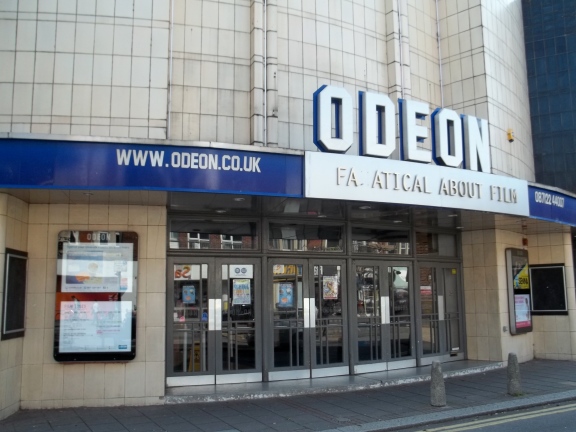 Upon approach, I wondered why a brick wall obscured the front part of the theater. I did some research and found out the church across the street was concerned about the “glowing sin” that emanated from neon signs and movie posters, so a partial wall and side street were built to make the theater more discreet.   My, how times have changed!

There are three screens in the Odeon, one large screen with 400 hundred seats and two smaller screens with 167 and 169 seats.  The large screen is decked out in major art deco architectural style, but I didn’t get to marvel in its beauty.  Unfortunately, the movie I wanted to see was playing in Theater 2 (a smaller screen on the lower level).

When I went into the lobby of the Odeon to buy my ticket, I was so excited to get my first overseas ticket stub.  Just like I save stones and seashells, I also hang onto my movie ticket stubs.  I have stubs dating all the way back to 1994 and I keep them all posted on a large bulletin board, (but that’s another post for another day).  Sadly, I was let down a little bit because they don’t give out actual tickets, but rather a flimsy receipt that shows payment.  Rats!  After a few years, that thin piece of paper will fade away to nothing, but I’m certain my memories of this place will outlive the ink.

Theater 2 turned out to be smaller than the theaters that end up in the back corner of the multiplexes back home,  (you know, the auditoriums that play older releases and smaller films), but it’s actually pretty cozy.  There are no middle seats because the hallway runs down the center of the theater.  Instead, two equal sections of seats run along each side of the screen.  Stadium seating does not exist, but there is a slight incline from the front of the theater to the back.  Too bad it’s not steep enough to help a short person such as myself.  The only way to avoid the poofy hair and tall heads in the front rows was to sit at the far left side in the back.

Once in my seat, I got a chance to assess the screen I’d be watching for the next two hours. It was at this point that I realized I may be a bit of a spoiled American when it comes to the movie-going experience.  My first thought after beholding the Odeon’s screen was, “My TV is bigger than that.”   Even still, I had to chuckle because that cute little screen is quite befitting of a theater with so much personality.

What lacked in screen-size was more than made up for with the sound system.   As soon as the lights dimmed, the sides of the screen slid out a few more inches (I’ve honestly never been so excited over a few inches in all my life) and a little click snapped in the speakers.  A commercial for a video game lit up the screen and the sound almost blew me right out of my seat.   The surround sound alone was worth the £9.50 I paid for my “ticket.”

The spectacle of X-Men: First Class made for a fun movie that was perfect for whittling away a Saturday afternoon. However, what made this typical summer blockbuster so enjoyable wasn’t the special effects or the gorgeous lead actors, but rather the Odeon itself.  Even though I was far away from home, this little theater made me feel like I was sitting on my couch watching a movie on a big screen TV with a killer sound system.  Never once has a 30 screen multiplex given me such a warm embrace.