Book inscriptions have long fascinated me and are often the deciding factor in whether I purchase an old, beat up book. Most of my “antique” books are falling apart with brittle pages and water damaged covers. Nothing about them is valuable in the monetary sense, yet they are priceless to me because of what is written on the inside.

Faded ink and fancy script piques my curiosity and adds an element of humanity to an old relic. There are names, years, notations, greetings, and sometimes objects stuffed between the pages. People I’ve never met left a piece of themselves behind and that somehow creates a connection. These old books are almost a portal between the present and a long forgotten past.

I first documented my love of inscriptions a few years back, (see Beautiful Book Inscriptions). With the focus mostly on elegant script or heartwarming stories, there wasn’t much room for the more mysterious books on my shelf. Sometimes the inscription is so confusing or difficult to read, I’m inclined to add it to my collection so I can figure it out!

The three books that follow have some of the more curious inscriptions. The inscriptions aren’t the stuff of mystery novels, but they do make me wonder about the people who wrote them.

The back cover of this edition includes a list that directly quotes parts of The Prince or offers cryptic notations about the text. The entire book is marked up as if it was used by a student. Passages are underlined and countless notes are scribbled in the margins. Within the pages I found a pressed maple leaf. I can’t help but wonder who left behind such detailed and thoughtful notes. Was it the same person who saved the leaf or was that someone else down the line?

Every blank space in the front and back covers is filled with very messy cursive writing. I can’t read half of it, but given the topic of the book and several mentions of God in the script, it’s most likely religious. The question is whether it’s contemplative, reactionary, summative or philosophical. The writing almost looks hurried and feverish as if this person could not write fast enough. Something was in this person’s head and they just had to get it out before it was gone. Also intriguing is the handwritten notation (in a different script) of an organization’s ownership of the book.

If anyone wants to take a crack at deciphering the script, leave your thoughts in the comments!

The inside cover of this little gem is particularly perplexing in that it includes the names of two owners (which isn’t odd at all), but also a list that includes the title of the book itself, (which is curious). All I’ve been able to find out is the names listed are editors of poetry and ballad compilations for student reading. Perhaps one of the owners of this book was creating a shopping or reading list. 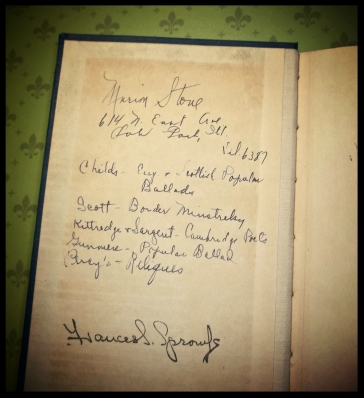 Then, of course, are the stories lost to time. Banged up corners, missing pages, and ripped binding all have something to say. Someone a century ago dropped it on the floor or spilled a glass of water. Subtle little mysteries live inside every old book.

10 thoughts on “Book Inscriptions to Ponder”